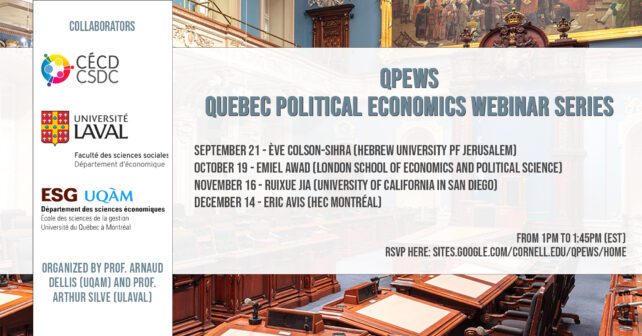 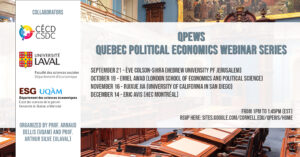 The Quebec Political Economics Webinar Series (QPEWS) is a webinar series that will meet by Zoom on Mondays once every four weeks, from 1 pm to 1.45 pm (EST). The QPEWS will prioritize presentations by emergent scholars.

“How Do We Choose Our Identity? A Revealed Preference Approach Using Food Consumption” (with David Atkin and Eve Colson-Sihra)

“International Coordination and the Informational Rationale of Delegation” (with Nicolas Riquelme)

“The Nexus of Elites and War Mobilization: An Empirical Investigation” (with Ying Bai and Jiaojiao Yang)

Abstract: This paper documents that elites made war and war made elites, using the setting of the organization of the Hunan Army — an army organized by one Hunanese scholar-general from existing local militia to suppress the Taiping Rebellion (1850–1864). We construct comprehensive datasets to depict the elites in the scholar-general’s pre-war network and the distribution of national-level offices before and after the war. By studying how pre-war elite connections affected where soldiers who died actually came from, and subsequent shifts in the post-war distribution of political power towards the home counties of these very elites, we highlight a two-way nexus of elites and war mobilization: (i) elites used their personal network for mobilization, and (ii) network-induced mobilization elevated regional elites to the national political stage. These findings are relevant for understanding what determines war mobilization and and who benefits from war.