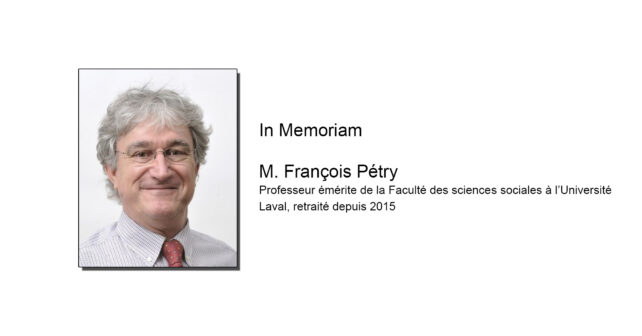 It is with great sadness that we learned of the death of our colleague and friend François Pétry, who passed away on Saturday, September 19, 2020, at the Hôtel-Dieu de Québec. He is survived by his wife Silvia, his son Julian and his grandchildren, as well as hundreds of students and colleagues who have benefited from his teachings, his supervision and his talents as a researcher.

After spending eight years at the University of Manitoba, François had a distinguished career in the Department of Political Science at Université Laval, where he was professor from 1992 to 2015, then Emeritus professor. He was a member of the Centre for the Study of Democratic Citizenship for more than 10 years. He was a mentor for some of us, a spirited collaborator for many others, and a pleasant and convivial colleague for all those who were lucky enough to know him.

His research on public opinion, public policies, electoral pledges, and on Canadian and Quebec politics has had a very significant impact in Canada and internationally. Among other things, he was one of the main initiators of the Polimètre, a research and dissemination tool he was very proud of.

François was a leading researcher, but also a colleague devoted to his department (which he chaired from 2011 to 2015) and to his discipline, in particular with the Société québécoise de science politique (SQSP), of which he was president in 2009-2010. François won the SQSP Award of Excellence in 2019, which recognizes the exceptional career of a Québec political scientist. In 2016, the SQSP created in his honor the Jenson-Pétry Award for the best master’s thesis, to celebrate the quality of his commitment to the supervision of graduate students in political science.

The Centre for the Study of Democratic Citizenship offers its deepest condolences to his family and loved ones.