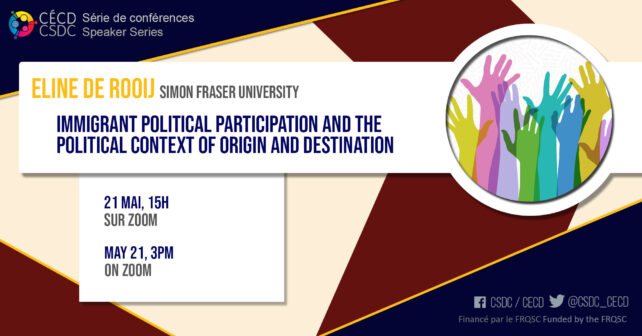 Immigrant political participation and the political context of origin and destination

You can learn more about Professor De Rooij here.

Important: We inform you that our events are recorded and posted on our website and our social media. For the first part of the event, only the speaker and the CSDC membre presenting the speaker are recorded. For the questions period, all the participants might be visible on the recording. If you do not want to be recorded, you can 1) turn out your camera and use the audio only to ask a question, or 2) ask your question in the chat, and the moderator will ask the question for you.

Abstract: This talk addresses two major debates around immigrants’ political involvement. The first debate concerns the relative importance of early-life experiences over those that stress the importance of experiences gained in later-life in determining political involvement. I present results from a study that examines the relative impact of the pre- and post-migration political context on rates of direct political action among immigrants. I use an extensive dataset that merges data from multiple rounds of the European Social Survey with contextual data on pre- and post-migration contexts, covering 32 countries of destination and 179 countries of origin. I suggest that although pre-migration contexts and individual characteristics are certainly important factors in explaining political action, immigrants show a greater adaptability to post-migration political contexts than has previously been argued. The second debate concerns whether engagement with politics – being interested in and knowledgeable of politics and/or feeling you have a political voice – necessarily precedes political action, or whether political action can also substantially impact engagement. Here, I briefly present the design and results of a (failed) pilot study that sought to experimentally test the impact of extending voting rights to non-citizens in school board elections in the US on political engagement. I reflect on what went wrong and discuss future avenues of research. Both these debates are important for how we think about immigrants’ political involvement and the policies that seek to facilitate it, and for understanding political participation more broadly.

See all the other Speaker Series Events here.

This series is sponsored by the Centre for the Study of Democratic Citizenship, which is funded by the Fonds de recherche du Québec – Société et culture (FRQSC).